China vs EUA: who wins the fight? 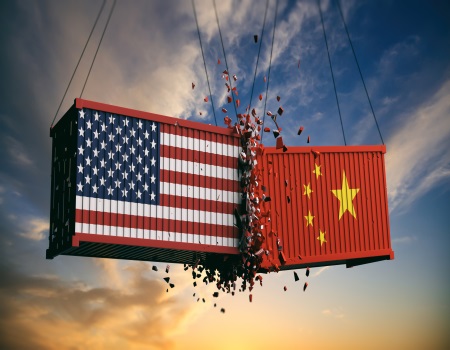 The two leading economies in the world seem to be with their backs turned. Recently, the two countries imposed new tariff schemes that may have an economic impact of around 16.000 million dollars.
By order of the President of the United States, since the beginning of July there’s a new tariff scheme regarding Chinese imports in the amount of 34.000 million dollars (approximately 29.000 million euros). China responded the same way. In April of this year, in order to restrain a trade war that was about to happen, the Chinese leader Xi Jinping has announced a “new policy of economic openness” followed by lower customer fees. Even though the American economy wasn’t directly mentioned, the Chinese President has made clear criticisms towards the protectionist policies of Donald Trump’s government and warned about the “Cold War mindset”.
None the less, in July, the President of the Unite States has decided to move forward against China. Since of beginning of that month, the both countries have already imposed new customer fees to a selection of products evaluated approximately in 100.000 million dollars (85.000 million euros). The list of taxed products has resulted in a formal complaint on the World Trade Organization (WTO) by China.

Action, Reaction, Retaliation
The reaction of the Asian giant didn’t take long. “China made the promise of not shooting first but, in order to defend the fundamental interests of its country and population, it’s being forced to fight back”, stated the Chinese Minister of Trade in an announcement. Overall, 106 products (soy, cars and orange juice) will suffer an import tax of 25%.
The adoption of protectionist measures and taxes, for instances, over aluminum and steel, were one of the first measures of Donald Trump, within what is already the new trade war of the 21st century. First the EU, next was Mexico, Canada, Japan and Brazil… But the President never concealed that China was the main target.
Trump accuses the Asian country of imposing disloyal trade practices and applying excessive taxes on some American products. Additionally, Uncle Sam’s country believes Beijing is using American technology to easily trade their products, which is a subversion of all intellectual property rules, and that way overbalance the trade balance in its favor.

Who loses?
In this polemic escalate and protectionist measures, which of the countries will lose out more? According to Fitch’s projections, the USA is jeopardizing 0.8% of economical growth, while China may only expect a downfall of 0.3%.