One foot in Milan and another in the USA 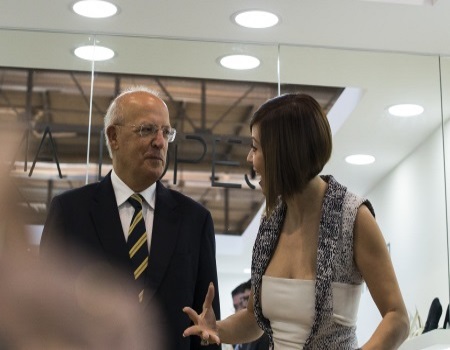 The Portuguese footwear industry was, once again, on the spotlight at the greatest footwear fair worldwide, theMICAM. In Milan, 96 Portuguese companies have proofed their creativity abilities. However, the main topic of conversation was the USA.

“The USA will definitely be a huge investment, where we’re going to make a really intense work. It’s the market of the markets, where all brands can exceptionally position themselves. It is the land of opportunities”, stated APICCAPS’ President.

Highlighting the fact that the USA are the “world’s largest importer of footwear”, importing 2 billion pairs of shoes annually, Luís Onofre also noted the requirements' challenge the Portuguese companies of the sector will have. “It’s a market, where brands position themselves in a special way. It’s the most demanding market in the world”, ensured Luís Onofre.

At the moment, the North American market occupies the sixth place in the ranking of the main destination countries of the Portuguese footwear exports, right after France, Germany, the Netherlands, Spain and the UK, therefore representing approximately 4% of the sector’s sales abroad, of a gross amount of 80 million euros.

New heavy players
Portugal was, once again, on the spotlight at theMICAM. However, there were some newcomers among the Portuguese entrepreneurs. ASPORTUGUESAS, Preguis, LIWYC and Sinovir Shoes went for the first time to greatest footwear fair worldwide.

ASPORTUGUESAS, a startup created by Pedro Abrantes along with Amorim Cork Ventures, and that has now Kyaia’s support, holds the first brand worldwide of cork flip-flops. The adventure at Milan’s fair is within the exports’ strategy that the company is now beginning. “Our goal is to sell our brand on international markets. To that, the presence in theMICAM, the greatest event of the specialty, is mandatory”.

Besides Pedro Abrantes, also Preguis has attended theMICAM for the first time. The brand, founded by the company Martiape, has presented its first collection in Milan. “We combined the know-how of 40 years of production to an innovative and cutting-edge design. Therefore, we believe in the high quality of our products”.

Also, LIWYC (the new sports brand of Abreu & Abreu) and Sinovir Shoes have presented their collections at the exhibition for the first time. For the Portuguese companies, the attendance in Milan’s fair is essential to the exports’ strategy.
The 84th edition of the fair has ended with positive results. Altogether, 41.187 visitors, over 5% than September last year, have walked through the corridors of the greatest footwear exhibition worldwide. Approximately 28 thousand foreign visitors and 19 thousand Italians have looked up over the 1441 brands that were present. Once again, Portugal had the second biggest foreign delegation.
Highlight to the number of visits from Russia (over 32% than September 2016), USA (over 15%) and China (over 7%)
According to ANCI, “the numbers validate theMicam’s importance and what it represents to the international footwear industry. The event is still going through a long process of renewal, since the last edition. We achieved two major milestones with this edition: we had some of the main brands of the luxury segment; and we were able to match the fair’s last day with the start of Milan’s Fashion Week”.

The government support to the sector
The Portuguese government is alongside the footwear companies. After the Prime Minister, António Costa, and the Minister of Economy, Manuel Caldeira Cabral, this year the government representation at greatest footwear fair worldwide was ensured by Augusto Santos Silva, Minister of Foreign Affairs. The footwear industry “is one of the sectors of the Portuguese industrial economics that is more modernized and internationalized” and disputes the leadership of the top segment with the major producing countries. “We are talking about a sector that exports over 95% of its production and that is currently present in 152 different countries throughout the five continents. Furthermore, it actively contributes to the Portuguese economy and employment in a very significant way and in which we have a balance of trade highly favorable”, stated the Minister.
Considering the “intelligently designed planning the sector has been following”, namely the investment “in international markets” and “sophisticated segments”, Santos Silva recalled that the Portuguese footwear “competes with other industries, such as the Italian, to the leadership of the top segment”.
“For every 100 euros the Portuguese footwear sector imports, it exports 250. The hedging ratio of imports by exports is 2.5, which is very important”, considered the Minister, also highlighting that the available data concerning the first half of this year “show how a sustained growth, an extremely positive trade balance and value and jobs' creation dynamics is important”.
In the company of the Minister, Eurico Brilhante Dias e Ana Teras Lehmann, namely the Secretaries of State of Internationalization and Industry, visited the portuguese delegation at theMICAM and Mipel, a fair focused on leather goods, which, in this edition, was attended by five national exhibitors.