Portugal at the front on the 4th Industrial Revolution 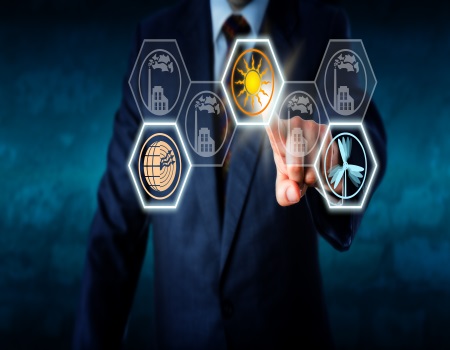 The 4th Industrial Revolution has already started and, this time,

Portugal is at the front. The government has launched, in Leiria, a

and Internet of Things (IOT) are key concepts, which might impact over

50.000 companies. The footwear sector, through APICCAPS, has already

presented its ideas and was acknowledged as a “case study”.

An investment of 2 million euros and over 4,5 million euros of expected return in the coming 4 years. The program called i4.0 includes a set of 60 actions and will allow the requalification and training in the fields of digital competences of over 20.000 workers.

“It’s the first Revolution in which Portugal isn’t in a disadvantageous position. On the other occasions, we were always disadvantaged, perhaps due to the geographic position or by the lack of raw materials”, stated the Prime Minister. “In contrast”, continued António Costa, “this is the first industrial revolution that happens when we have all the basic ingredients to be at the front: we have a good technological communications infrastructure; a business fabric, which is always willing to receive knowledge; and, most of all, we have a set of highly qualified staff and dynamic universities and polytechnic institutes'.”
“Most of the actions, which compose the strategy for the 4.0 Industry, has as a priority the qualification of the human resources, the conversion of workers and the creation of new jobs”, said the Secretary of State for Industry. “The bulk of these actions has to do with people because it aims to the requalification of the active population”, explained João Vasconcelos. “With the digital world, the client gains a greater freedom of choice. However, it’s a huge challenge because the client enjoys to be in touch with the factory, to know if the legislation is met and in which conditions the employees work”.
“Most of the actions aren’t leading-edge, as expected, but are realistic within the sector they are going to be used and to answer the upcoming needs and challenges. In some cases, we’re talking about industries and sectors, which still define the 3.0 challenges”, explained the Secretary of State for Industry.

The Portuguese Shoes Newsletter will now present some of the actions of this new program:

Vale Indústria 4.0
The government will mobilize European structural and investment funds up to 2,26 billion euros of benefits, through the program Portugal 2020, towards the “awareness, adoption and massification of the technologies related the 4.0 Industry’s concept in the coming 4 years”, according to a statement from the Ministry of Economics. Among the measures, the Vale Indústria 4.0 will created: an instrument of support to the digital transformation through the adoption of technologies that allow disruptive changes on microbusinesses and small and medium-sized enterprises business models.

Digital Skills
Until 2020, the government wants to provide training in information technologies to over 20 thousand people. The program of digital skills will function in collaboration with the private sector to solve the lack of specialized technicians in the area and allows the support of vocational retraining, therefore creating new opportunities of employability through the acquisition of new qualifications and skills.

Technicians i4.0
The program dedicated to the 4.0 Industry includes the review of vocational and technical courses’ curriculum, in line with the demand of new skills on the part of the companies within the scope of digitalization of the economy.

ADIRA Industry 4.0
The first laboratory integrated as an additive in the manufacture is being created to develop a new ecosystem associated to this new next-generation technology, which will allow new ways to project and manufacturing. This laboratory is boosted by ADIRA, in partnership with CEiiA, with ADIRA’s evolving machine, whose prototype was developed in collaboration with Fraunhofer and is available to universities and companies from all industries.

FOOTure 4.0
The footwear sector will be, once again, at the front of this new Industrial Revolution. FOOTure 4.0 was presented by APICCAPS and consists in a strategic plan for the Portuguese footwear cluster, which aims to start a road map of the Footwear Cluster to the Digital Economy.

Digital Bosch
Another action that is worth to mention is DONE Lab by Bosch, a laboratory for advanced additive manufacturing of prototypes and tools, inaugurated at the School of Engineering of the University of Minho, in Guimarães. The idea is a partnership between the School of Engineering of the University of Minho and Bosch Car Multimedia within the scope of the biggest project university-company nationwide, in what amounts to a total investment of 54,4 million euros until 2018. Highlight also to the protocol between Bosch and the University of Aveiro to develop solutions for smart houses and the digitalization of Bosch’s equipments, in an investment of 19 million euros and the prediction of 150 new jobs.

PSA Mangualde
This initiative, with an estimated investment of 12 million euros, will be developed by PSA Mangualde in a consortium with three universities and five technological partners, based on the following areas: intelligent robotic systems (collaborative robots); advanced systems of inspection and traceability (machine vision); automatic guided vehicles (AGV) systems; digital factory(IoT); and factory of the future – FoF (low rhythm and high diversity).