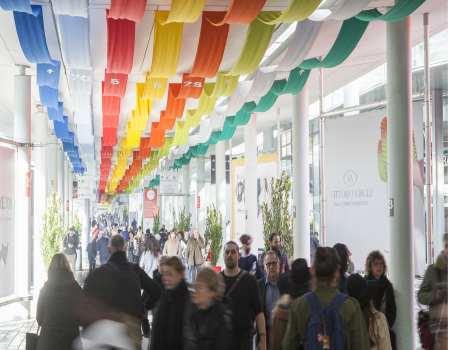 Responsible for more than 8,000 jobs and for exports worth more than 500 million euros, Portuguese companies use theMICAM and MIPEL as an opportunity to contact their international customers. However, the aisles of the exhibition are also home to the inspirational stories of those who shout the name of Portugal in foreign lands.

Recognised nationally for his luxurious men's suits, two years ago, Tony Miranda stepped into the world of footwear with his iconic imitation stingray shoes. With creativity and constant change being part of his DNA, he used theMicam to launch his collection of women’s footwear.
"Alongside the men's collection, inspired by the theme of dualism, the mirror reflects feminine luminosity, giving rise to a new collection ‘To Mirror’, where the exuberant and flexible woman, who appears in a number of roles throughout the day, discovers in Tony Miranda’s footwear the casual chic where night and day merge. The careful choice of materials, the range of design and the multiplicity of options make this collection the mirror of its creator.”
Needing no introduction, it has surprised yet again at the world’s largest footwear exhibition. This time, the Fly London range of shoes premiered at Mipel (the accessories fair) alongside a new range of leather goods.

“Our presence here is part of the investment strategy of the accessories side of the business, seeking to strengthen brand awareness in this sector, to open doors to new distribution channels and attract new specialised points of sale”, said the company. About 20 new models, ranging from backpacks to wallets, were presented, and for the first time, the company introduced a range of purses. Fly London also launched three new lines of footwear in partnership with Goretex. With this new partnership, the Guimarães company promises to ensure better performance and comfort, even in the most extreme weather conditions, by combining its unique and characteristic designs with a technology that is both innovative and which adds value.

Investment is not limited to those more established players, however. Founded just two years ago, Friendly Fire is already causing a stir in the market with its irreverent collections: pompoms and sparkles that attract the attention of customers; however, at this year’s exhibition, this company from Guimarães appeared in its own space and in a new pavilion. “We thought it was time to try to have our own space to continue growing. We moved to another pavilion and are very happy with the contacts we have made”.

Along the aisles, we also come across Eureka. With 30 stores in Portugal and three elsewhere in Europe, this company from Vizela uses theMicam as a platform from which it can meet its customers. As part of its ongoing industrial expansion project, Eureka has invested 1.2 million euros in online activities and on expanding into new markets. Colombia, Chile and Panama are at the forefront of the marketing offensive of a company looking to open two outlets in 18 different markets each year.

The Alberto Sousa brand used this event to announce its first show on national soil. Eureka will become the first Portuguese footwear company to appear on the ModaLisboa catwalk when it debuts in March. “Adopting an urban look, the collection that will be on show has a robust spirit, from a variety of perspectives, by the size of accessories or even by the mood itself.”

The Milan exhibition closed after having welcomed a record 45,000 visitors, representing a 5% increase over last February’s event.