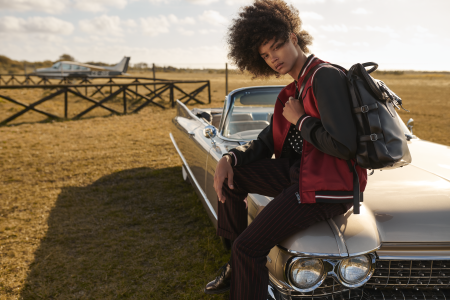 Per year, Portugal exports 113 million euros in leather goods and saddlery. Since 2010, external sales have increased over 250%.
However, there are also other impressive numbers. There was an increase of 86% in jobs to 1.871 employees, by the end of last year. The number of companies also increased 6% to 120 companies. Some of the units are projects from young creatives, such as Teresa Bettencourt. The young fashion designer was an intern of Alexandra Moura, one of the most prestigious Portuguese creators but quickly understood that her favorite raw material was leather. And that’s how Manjerica was born, in 2011. The brand’s founder are from Terceira Island, in Azores, and have replaced the colorful landscape for an authentic colorful canvas.
Besides bold and colorful combinations, every collection is inspired by 1960’s purses. “Azores are unlimited source of inspiration with its powerful images. It’s the background of this story we want to tell”, stated Teresa Bettencourt. “Comfort and lightness, provided by these memories, have transformed in the compass that guides us into an authentic inner expression of this speeded up world we live in. Manjerica is inspired by modernity but its essence comes from the past”. The brands’ founder also stated other equally important factor: “it’s rewarding to see the younger people increasingly investing in the sector. There’s an effect in the new brands and in the Portuguese tradition of saddlery that is starting to be recognized abroad”.

A new approach
The sector of leather goods and saddlery has reinvented itself. Inspired by modernity and with its essence from the past. This was the starting point of APICCAPS’ new campaign, “Portuguese Leather Goods”, which aims to value the know-how of a great tradition that embraced nowadays’ demands and also exhibits great growth potential.