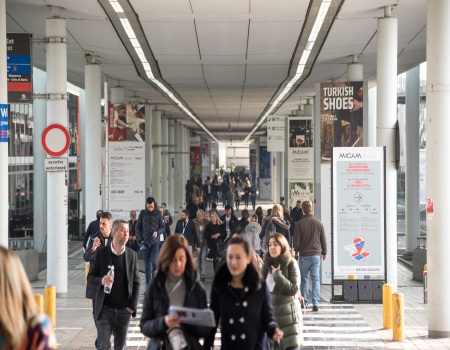 This year, Portugal continued to strength its presence at the biggest footwear exhibition worldwide. Overall, 94 companies have integrated the national committee at MICAM, in Milan, and at MIPEL, an accessories’ exhibition.

In February, in Milan, Portugal has registered one of the greatest representations ever on at an event abroad. Altogether, the 90 Portuguese companies that attended MICAM are responsible for over 8.000 jobs and approximately 500 million euros in exports. At MIPEL, four of the most important Portuguese companies have promoted the growing sector of leather goods.

In total, over 1.600 exhibitors from around 50 countries have marked their presence at MICAM. Portugal was, once again, the second largest foreign delegation at the fair, only being surpassed by Spain.
Among the Portuguese committee there are debutants. Luís Miguel Contreiras is passionate about fashion and has made it his professional activity for over 20 years. His passion and experience with the fashion world have lead him to an increasing interest in innovative products that can be allied with quality, personal style and a feeling of special purpose. Thus, was born Pintta Shoes, a brand built and designed to fit the various personality types, mainly those who are not afraid of wearing Pintta.
However, not all of them are first-timers. There are some national brands that have been attending the event for over two decades. To Salomé Fonseca, from Take a Walk, MICAM is still the best place to get in touch with the customers. “I believe it is of utmost importance to allow the buyers to know the collections at first hand. Therefore, the presence in this fair is fundamental”.
The presence at MICAM is within the promotional strategy defined by APICCAPS and AICEP, with the support of the Program COMPETE 2020, and which aims to consolidate the relative position of the Portuguese footwear in external markets.
Since the beginning of this year, approximately 200 companies from the footwear sector are currently participating on a mega promotional program at a global scale, which will result on the presence in around 60 of the most prestigious specialty international forums.


MICAM continues to exceed expectations. The 85th edition of the biggest footwear fair worldwide has ended with a record number of 44.000 visitors, 60% of which are from overseas. Within the EU, highlight to the increase of visitors from France and Germany. According to the organization, “in the recent editions, we have been able to improve the fair without changing its nature. Today, MICAM is a more glamorous place and, at the same time, more practical. Companies can find buyers from all over the world and choose to come to this fair to launch their new products and establish and consolidate their trade relations”.

Portuguese government alongside the companies
This year, the government was represented by Paulo Ferreira to support the Portuguese companies in Milan. The Assistant Secretary of State and Foreign Trade has visited the Portuguese delegation at the biggest footwear fair worldwide.
To Paulo Ferreira, last year’s final figures are a sign of the cross-border industry's success. “In 2017, the footwear sector almost reached two million euros in exports. However, there is a number that must be emphasized: in 10 years, exports have increased approximately 50%”.