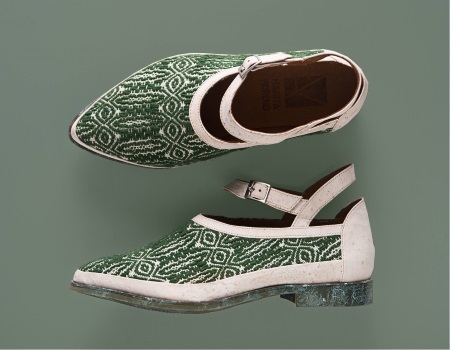 To a sector specialized in the production of leather footwear, the use of products of animal origin is not viewed positively by the vegan niche. Veganism is gaining ground on a global scale: there are more and more animal protection movements asking for alternatives to animal exploitation in the food and fashion industries. But what is to be vegan? Pedro Caria, from Shaping Brands, explains that “veganism is a lifestyle and a way of life that avoids hurting others as far as possible. It motivated by animals, environment, people and health. Expressly rejects animal exploitation, cruelty and abuse”.

The consultant, who recently launched the “Vegan Revolution” guide (available on CTCP’s website), believes that choosing vegan footwear is a natural choice for those who run their lives according to ecological principles. “As of the moment that customers adopt a lifestyle, they will incessantly seek solutions to achieve it”.

According to The Vegan Society, “this philosophy aims to exclude, as far as possible and practicable, all forms of animal exploitation and cruelty for food, clothing or any other purpose and, by extension, promotes the development and use of alternatives free of animals for the benefit of humans, animals and the environment”.

There are many ways to achieve veganism but all of them have one thing in common: a diet based on plants, on the release of products, sub products, matter or substances from animal origin, such as meat, fish, dairy products, eggs, honey, insects, crustaceans, silk, wool, chemical products or others tested on animals.

This is a real niche market that has demand on a global scale. In addition, adds Pedro Caria, “its potential exists and appears to be increasing day after day. This niche is currently considered by many as the largest and most important movement worldwide”.

The Vegan Society has promoted two market researches in the UK in different time periods. The first was conducted by Ipsos Mori, in 2016, and concluded the vegan universe has increased 360% within the Great Britain in 10 years. In 2016, 542.000 people over 15 years old (approximately 1% of the population) were following a vegan diet, a significant increase comparing to 2006 results of 150.000 people.

The study showed that veganism is a fast-growing lifestyle movement in the UK and is estimated to grow up to 1 million people. A second research done by Option Matters, at the end of 2017, has allowed to understand that half of UK’s adults are currently adopting vegan purchase behaviors, being now the UK more vegan-friendly than ever before. Half of the 20.000 adult individuals interviewed answered they know someone who’s vegan and over 1/5 said they were considering becoming vegan.

According to Pedro Caria’s study, “nowadays this is considered by many as the largest and most important movement worldwide. For instances, in the USA, Canada, Brazil, UK, Belgium and Germany the growth of this niche it is notorious over the years”.


But…. For an industry with a strong tradition in manufacturing with leather, how can these new materials be implemented? “It’s essential to define the target public, customer profile and positioning with the best possible accuracy. Brands should create a truly vegan product. The vegan commitment cannot fail”.

In technical terms, the products declared as vegan can’t contain, as far as possible, any product or sub product of animal origin and should guarantee that no animal was used on its production, even in tests.

“Vegan footwear production already happens in Portugal for several years now, since some of the most known and prestigious vegan brands worldwide have chosen our country for their products' manufacture. In Portugal, we have the know-how of production, so it is only necessary to adapt to the materials and components that meet the vegan products’ requirements. As we know, our industry is highly skilled in producing added value footwear, in which the finishings, for instances, have a major role and which can only be achieved through accumulated knowledge. Working with no leather products is less complex at that level. In my opinion, the biggest challenge is in the supply of quality materials that surely guarantee that they don’t have any product, sub product, matters or substances of animal origin (including vamps, soles, eyelets, glues, laces, waxes, inks, ….). I would say this is the biggest challenge”.

This is a movement that has been increasingly acquiring credibility and a very positive perception, due to the responsible work that has been developed by its actors throughout the years. “Nowadays it can still be considered a niche but in the future, it may be a lot more. For many, the Vegan Revolution has just begun”.

In Portugal, some brands have already made moves within this niche market. One of them is Rutz. Raquel Castro’s brand is internationally known due to the use of cork. “Cork has several characteristics, such as waterproofness, that lead me to believe it will be used in a lot of products in the future. However, we have created a vegan line that doesn’t include any type of animal component because we realized there was a huge demand for this type of production”.

However, we also found newly brands in the market, such as ASPORTUGUESAS. Ecochic, a startup created by Pedro Abrantes together with Amorim Cork Ventures, and now supported by the Kyaia Group, is the owner of the first brand worldwide of flip-flops made entirely from cork. But the surprises aren’t over yet. Nae (No Animal Exploitation) proposes an alternative to animal exploitation. The brand with a decade operation uses natural materials, such as cork and pineapple leaves. At the same time, uses recycled materials, such as tires and airbags, by using its polyamides, and plastic bottles. “Nae was born under the assumption of no animal exploitation and focus not only the natural and ecological materials, but also the design, style and quality that are already recognized in Portuguese footwear”.

Sales happen mainly online but the brand also has a store in Lisbon, in LX Factory, and is in 130 multi-brands point of sale worldwide. An international topic of conversation is also Marita Moreno, who was just been recognized in Australia with the FOMA – Symbol of Harmony Award. The brand with private label is on the market for 10 years with the mission of being 100% sustainable. The shoes are produced with natural material with no animal components, such as organic cotton, certified cork and rubber for the soles. In addition, the brand has sought to use the industry's wastage in a circular economy approach.

Besides Maria Moreno, two more brands were awarded in Sidney, 7 Hills and Elementum, both brands specialized in the production of sustainable footwear, through “a targeted approach to fashion with harmony between comfort, quality and environmental concern”.

But there’s a lot more happening in the market. The company Lucília, Vieira & Lima has launched Ultra Shoes four years ago. “The production of sustainable products already represents 15% of our overall production”, states Pedro Lima. The manager of Ultra Shoes admits some shoes “are already over 90% recycled”. The brand started with biodegradable shoes, then with upcycling and “right after we began the vegan segment, which, from these three fields, has the greater importance”. The German market currently represents 70% of the sales.