Luís Onofre: WE will not spare efforts in the USA 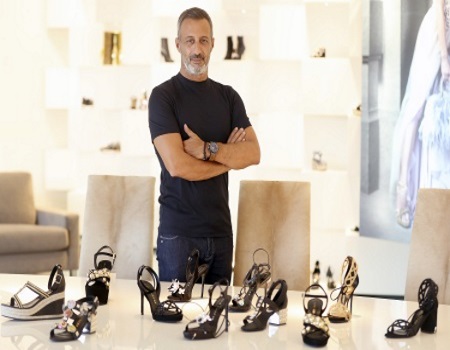 He is APICCAPS’ President for less than six months and is still taking the pulse of the sector. However, he’s already full of projects. Luís Onofre, the most prestigious designer within the Portuguese footwear industry, granted the APICCAPS’ newspaper his first interview, where he recalls the past, analyses the present and projects the future. You can read all about it in the next few pages.

Luís Onofre: designer, entrepreneur; and now association leader. How is it to live with these realities?
These realities are all complementary, in a way. I’m an entrepreneur for over 20 years. In fact, I am already a third-generation entrepreneur. I have learnt a lot during that period. Firstly, with my father, who is my role model. APICCAPS has appeared recently. In the first place, as director and now, much later, as president.

How did APICCAPS’ Presidency happen?
It came up unexpectedly. It was through an invitation by the President Fortunato Frederico, which I gladly accepted, with a strong spirit of responsibility.


We want to be world leaders in the use of new technologies.

Is it a great deal of responsibility?
Undoubtedly, yes! I'm succeeding a great businessman. APICCAPS is an association with inestimable prestige and I hope I can honor the past, which the entrepreneurs are so proud of. However, it is time for my administration set its own path.

For the first time, there were two candidatures to the presidency of APICCAPS…
The elections are over. Now it’s time we come together. The footwear sector has given, however, a real demonstration of plurality in these elections.
One characteristic that made APICCAPS a reputed association, in Portugal and abroad, is, precisely, that sense of togetherness. The sector has always spoken in one voice and the (good) results are there for all to see. In my belief, this is the strategy in which we all are going to keep working on.

This is the first time a designer holds the presidency of a major industrial association…
Maybe... I can’t precise. But it seems a more than valid option to me, especially because this sector is embedded on a much broader industry: fashion. The Portuguese footwear, that is already renowned by its quality and production excellency, has have been gradually fusing itself with design and, nowadays, it is also attractive from that point of view. I’d like that both creation and design would increasingly be distinctive elements of this industry. And if I can contribute to that, better…

What plans do you have for the presidency of APICCAPS?
This is not the moment for big ruptures. However, I believe that, with my team, we can create the right conditions for the sector to be a major international reference for its sophistication and good taste. In technological terms, we will be even more ambitious: we want to be world leaders in the use of new technologies and take advantage of this new digital revolution. Just recently, at the first meeting of the Advisory Board, we were able to gather 50 entrepreneurs with the aim of creating sustainable conditions for an even more competitive future. We will talk about the Advisory Board later. But for now, let’s begin with the priorities for the next few years. For instance, in the field of innovation….
In the innovation area, within the 4.0 Industry, we’ll create a digital economic road map for the footwear sector. With the intensive introduction of the new technologies, we’ll most certainly enhance new opportunities that come from the digital revolution. We want to create a closer relationship to the final costumer. The development of important products, new materials and the investment on customization will be other areas that will also have our full attention.

We want to create a closer relationship to the final costumer.

When will this road map be presented?
I believe we can present it until the end of the year but we are still working on the document. The Advisory Board meeting, for instances, was important in that sense because we could collect inputs that were very useful for the creation of a program, which meets an industry with a lot of distinctive realities.
I’d like to highlight the excellent work from the Footwear Technology Centre of Portugal - CTCP. Moreover, I challenge the companies to look for the Technology Centre and their technicians. This new digital revolution will bring many opportunities for all of us.

Let’s go back to the Advisory Board. Why did you decide to create it?
The Advisory Board is an organ that, although it’s not a statutory body, was created by APICCAPS’ Executive Board, precisely to broaden discussion about the concerns and challenges of the sector with a wide group of entrepreneurs. This Advisory Board is the result of a comprehensive reflection of the Executive Board, that had the contribution of all of my colleagues, and aimed to receive entrepreneurs of all generations, regions and even different sensibilities. I think we gathered an excellent group of people and I appreciate everyone that has accepted this challenge.

We have to strengthen the presence of the Portuguese footwear in the main European markets.

Concerning the main projects, as regard training and qualification, will there be major changes?
One of my first initiatives as APICCAPS’ President was to promote a campaign to attract young people to the industry. We want to capture a new generation and for that we will have to promote several activities, even in schools, that will allow us to present the footwear sector as a valid option for the future of the youngsters. We will be very persistent in this matter, as it is one of our biggest priorities. Qualification will always be one of our main priorities and, therefore, the proximity to the academic world is of the utmost importance.
I also think we can strengthen the relation of the sector with the universities and launch an entrepreneurship program. And we are creating conditions to this. Also in this field, during my presidency, I’d like to give special attention to footwear design and, if possible, even create a degree course in that area.

Do you have any plausible explanation about the fact that the young people are still avoiding the industry?
I don’t believe that's entirely true. I'd like to recall that, since the beginning of 2010, the footwear industry has already created over 9.000 new jobs.
That is not exclusively a problem of the footwear industry. It is a big issue that affects us all. It was with particular satisfaction that I recently saw our government, through the Secretary of State of Industry, defending that attracting the youngsters to the industry world is one of the main priorities concerning the economic policy.
Together, we have to learn how to present industry as a modern and evolved sector that is able to create career opportunities and a promising future.

Internationalization and corporate image are two matters which have always had special attention on the Association's part. Will this continue in the future?
It couldn’t be otherwise. The sector has been continuously growing in external markets for already eight consecutive years. This year, I believe we’ll reach a new exports’ record. What do these results mean? It means the work in this field is having a positive effect. However, we have to have more ambition. Concerning internationalization, the USA are a main priority. We’ll pay special attention to this market, with marketing and communication initiatives in several cities, as well as image and media efforts. We are going to approach the USA as we have never done before. It is the biggest footwear importer worldwide, is the country of opportunities and it deserves all our effort and focus. We will not spare efforts regarding the USA.


One of the main priorities is to capture a new generation.
We will not spare efforts regarding the USA.

What about other markets?
The investment in the USA doesn’t mean we are neglecting or forgetting other markets, such as Japan. We will equally approach a range of countries that, with the free trade agreements concluded by the European Union, have a great potential, such as South Korea, Singapore, Chile, Colombia or, more recently, Canada.
We also have a lot to be done within Europe. We have to strengthen the presence of the Portuguese footwear in the main European markets, which are our natural markets. In Europe, the excellent responsiveness of our companies should make a difference.

And concerning the communication and image plans?
We also have a lot to do in that field. Starting with the digital plan. We all recognize the image of our industry has radically changed in the past years. Fortunately, for the better. However, we will certainly keep that effort by widening our campaigns to other supports and, essentially, to a new costumers’ generation.
I also believe that our communication strategy should be more overarching and add all the segments of the industry.

The footwear and fashion Cluster is going to move forward?
It is already in progress. It was, in fact, at the base of APICCAPS’ creation, which represents all of the sector. Footwear was even one of the first sectors to get recognition from the government as a competitivity cluster. Therefore, we will dedicate a lot of our attention to this project.


How do you evaluate this government so far?
The outcome is positive, of course. I feel the government is beside the companies. Just recently, the Minister of Foreign Affairs and the Secretaries of State of Internationalization and Industry, were with us in Milan, at the MICAM. The Minister of Economy has been paying close attention to the sector. Last year, the Prime Minister also joined us and regularly seeks to get to know the reality of our industry.
APICCAPS never felt the need to criticize the governments… We never stopped defending the needs of our sector and respective companies and we’ll keep doing it. However, we refuse to publicly discuss politics. Thus, I stand by what I said: there is a very positive outcome of this government’s actions.

Modalisboa or Portugal Fashion?
Both. The ideal reality would be to have a truly integrated Fashion Week. Until this happens, the footwear sector, through APICCAPS, and its companies will logically attend both. Both events have been having a significant role in the promotion of the Portuguese fashion.

APICCAPS has promoted several initiatives with ANIVEC. Is this a strategy to maintain?
It makes perfect sense that the fashion sector should be able to develop initiatives, together, that have impact abroad. This is our logical approach, thus, the consequent approximation to ANIVEC (National Association of Clothing and Apparel Industry) and to AORP (Portuguese Jewellery and Watchmaking Association).
With particular regard to ANIVEC and the clothing sector, this proximity is not only desirable but also necessary. These are two complementary sectors with well-defined strategies but with multiple points of interest. It makes no sense that, promoting marketing initiatives abroad, we can’t find convergence elements. We consider ANIVEC an association of people of expertise, competence and desire to build.